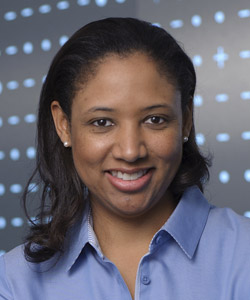 Kristala Jones Prather is a Professor of Chemical Engineering at MIT. She received an S.B. degree from MIT in 1994 and Ph.D. from the University of California, Berkeley (1999), and worked 4 years in BioProcess Research and Development at the Merck Research Labs prior to joining the faculty of MIT. Her research interests are centered on the design and assembly of recombinant microorganisms for the production of small molecules, with additional efforts in novel bioprocess design approaches. Prather is the recipient of an Office of Naval Research Young Investigator Award (2005), a Technology Review “TR35” Young Innovator Award (2007), a National Science Foundation CAREER Award (2010), and the Biochemical Engineering Journal Young Investigator Award (2011). Additional honors include selection as the Van Ness Lecturer at Rensselaer Polytechnic Institute (2012), and as a Fellow of the Radcliffe Institute for Advanced Study (2014-2015). Prather has been recognized for excellence in teaching with the C. Michael Mohr Outstanding Faculty Award for Undergraduate Teaching in the Dept. of Chemical Engineering (2006, 2016), the MIT School of Engineering Junior Bose Award for Excellence in Teaching (2010), and through appointment as a MacVicar Faculty Fellow (2014), the highest honor given for undergraduate teaching at MIT.