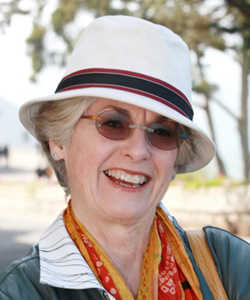 Alcatraz: Growing up on the Dark Side

Jolene Babyak is one of the most knowledgeable, firsthand experts on Alcatraz history—where she lived twice as a child.

She is the author of four books, Eyewitness On Alcatraz; Birdman; Breaking The Rock; and Alcatraz Most Wanted under the pen name Cory Kincade, and is currently working on two new books. She has interviewed scores of prisoners, officers and family members, and examined hundreds of prison files, studying the childhoods and family lives of both prisoners and staff residents.

Her father, Arthur M. Dollison worked on the island prison for nine years, eventually becoming the associate warden in 1961. Ms. Babyak’s family lived there for about two years when she was seven to nine and later for a year when she was 15, when one of the most spectacular escape attempts took place.

She has appeared in many nationally-televised videos, including “The Secrets of Alcatraz,” “Break Out,” and “Public Enemies” on the Discovery Channel; “The Big House,” “This Day in History,” on the History channel, as well as documentaries on the Travel, Learning PBS and BBC networks. She has also appeared on CBS news, “Myth- busters,” “CBS Sunday Morning with Charles Osgood,” and has had media interviews in Japan, England, Australia, Canada with Peter Zoskin of the Canadian Broadcast Company, and in Germany on “Brisant”. Recently, she appeared at Ciudad de las Ideas, in Puebla, Mexico.